Several members of the University of Ottawa law community intervened in the References re Greenhouse Gas Pollution Pricing Act before the Supreme Court of Canada. In our new Carbon Pricing Series, we learn about their experiences and the arguments they made on behalf of their clients.

In this video, we meet Joshua Ginsberg, Director of the University of Ottawa’s EcoJustice Environmental Law Clinic, who represented the David Suzuki Foundation before the Court. He argued that climate change, and specifically getting greenhouse gas emissions under control, constitutes not only a matter of national concern, but represents a true national emergency. Climate change, he contends, needs to be federally regulated within 10 years to avoid environmental disaster.

The Greenhouse Gas Pollution Pricing Act is an Act of the Parliament of Canada that sets a minimum national standard on greenhouse gas pricing to reduce emissions in Canada and fulfill the country’s commitments under the 2015 Paris Agreement. Some Canadian provinces challenged the constitutionality of that Act, taking the case to the Supreme Court of Canada based on an argument that it was beyond the jurisdiction of the federal government to impose a national standard on greenhouse emissions because natural resource regulation under the Constitution falls under provincial jurisdiction.

On March 25, 2021, the Supreme Court of Canada, in the landmark decision References re Greenhouse Gas Pollution Pricing Act, ruled that the Greenhouse Gas Pollution Pricing Act is a valid exercise of federal powers. The Court found that climate change is an existential threat to human life and that the issue must be approached as a matter of national concern through coordinated national and international efforts.

References and useful links
About the Reasearcher 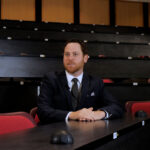 As the Director of the Ecojustice Environmental Law Clinic, Joshua Ginsberg teaches part-time at the University of Ottawa and mentors students working on Ecojustice cases. Before joining Ecojustice in 2016, Mr. Ginsberg maintained a dynamic litigation practice at a leading Toronto firm, dedicating pro-bono time to environmental groups. He also pursued a Master’s degree in environmental law at this time. He can often be found in Ontario’s backcountry and aims to paddle as many of its lakes and rivers as possible in one lifetime.