The Supreme Court, as explained by the Chief Justice of Canada 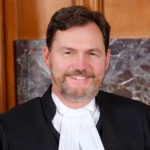