The ancestral rights of Indigenous Peoples who have not signed the James Bay Agreement: The thesis of unilateral extinction put to the test of fundamental rights

Nearly 45 years ago, the governments of Canada and Quebec signed the historic James Bay and Northern Quebec Agreement with local Cree and Inuit communities. Under this treaty, Indigenous Peoples renounced their rights to a territory covering 1,082,000 square kilometres in exchange for rights and financial compensation.

But certain Indigenous Peoples in Quebec still claim ancestral rights over the territory covered by the James Bay and Northern Quebec Agreement. These communities are not signatories of the treaty. However, a federal statute adopted in 1977 to approve and enact the Agreement purports to extinguish all land claims, rights and interests, not only of the Cree and the Inuit who signed and approved the Agreement, but of “all Indians and Inuit” in the territory.

Professor Ghislain Otis has assessed how this extinctive provision complies with the Canadian Bill of Rights in an article recently published in the University of Ottawa’s Revue générale de droit. In this video, Professor Otis closely examines the claims of the non-signatory Peoples and outlines the basis for his legal analysis. He concludes that the federal statute enacting the James Bay Agreement violates the Bill of Rights by unjustifiably depriving members of non-signatory communities of their right not to be subjected to racial discrimination in the enjoyment of their property.

This video was produced in collaboration with the University of Ottawa’s Revue générale de droit, with financial support from the Social Sciences and Humanities Research Council (SSHRC). The research upon which this article is based benefited from the financial support of the Canada Research Chairs program. The full text of the article by Professor Ghislain Otis is available on the Érudit, Soquij and HeinOnline websites.

For more information about this article and other publications from the Revue générale de droit, visit the journal’s website.

References and Useful Links
About the researcher 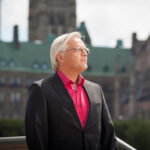 Ghislain Otis is a member of the Quebec bar and a fellow of the Royal Society of Canada. He holds a PhD in law from the University of Cambridge which awarded him the Yorke Legal Essay Prize for his comparative study of constitutional remedies. Professor Otis is currently at the Civil Law Section of the University of Ottawa where he holds the tier 1 Canada Research Chair on Legal Diversity of Indigenous Peoples. Professor Otis is the director of a major international research partnership funded by the Social Sciences and Humanities Research Council of Canada and the AUF (Agence universitaire de la Francophonie). The project brings together academic and indigenous researchers as well as indigenous organisations from seven countries working on a comparative study of the management of legal pluralism in postcolonial states (see www.legitimus.ca)