The experience of moving to the bench

English closed captions available.
Jean Faullem, I am a judge at the Superior Court of Quebec, in Gatineau. I studied law in Sherbrooke. I went to Quebec City to pass the bar, because I was working at the same time in a small law firm. I continued to practice after articling there, for a few years. In 1997 or so, I followed my spouse at the time to come and settle in Gatineau. I took the opportunity to enroll in the law school in Ottawa, and I did a Master's degree at that time. I called it "Regulation of the Internet". I came back to Ottawa and tried to do a PhD. I did a few years at the doctoral level, where I taught Internet law, e-commerce, Internet communications at the same time. At a certain point, I got bored and missed private practice. I found a job with a firm called Noël et Associés in Gatineau. In 2013, I was appointed as a judge for the first time to the Court of Quebec, again in Gatineau. Six and a half years later, I was appointed to the Superior Court. What we hear most often, in fact, is the challenge of being a little more alone. Even if you join a large group of judges, judicial practice as a magistrate, as a judge, is a life that is a little more lonely. When you're in private practice as a lawyer – I was at Noël et Associés: there were about 15 lawyers at the time. With all the employees, there were maybe 25 or 30 of us in the office, with all the clients we met every day, with the great relationships with the clients, the multitude of phone calls we could receive, the hundreds of emails I had to answer every day. From one day to the next – from the moment I was appointed, in fact, the next day, it was all over. The phone doesn't ring anymore, the emails come in much less, so it's a shock. Initially I was a civil lawyer in private practice, but when I arrived at the Superior Court one of the big elements, one of the big parts of the Superior Court is the cases in matrimonial matters, in family law. And I had never done matrimonial law. I had even said to myself in private practice "I will never do that. It doesn't look good. It doesn't make sense. Leave it to others. "But then I discovered it. So that was my challenge. Especially in Superior Court, my challenge was that. That was my fear. I was, and I still am, a bit fearful sometimes. You have to change your way of thinking. Whereas during a whole professional life, one has become accustomed to taking a stand for a client in a case, to develop a strategy depending on the case – overnight, that's over. In the beginning, I still remember, the first few times I got on the bench as a judge, practically getting up to make objections; sometimes wanting to intervene and practically help people, and even lawyers, do their job. But it passes. It passes with time. It takes a little while, but it passes, and then you get into a bit of a groove and then it gets much better. Yes, the judge has a different role today. We often hear that. There was a time when we talked about the sphinx judge, the one who listened and never intervened, who didn't ask questions. All that has changed a lot. The judge is much more involved in cases now. And I am one of those who actually ask a lot of questions during the trials. What I always say to the parties, and I even said it to the unrepresented parties when I was doing small claims in the Court of Quebec, is that I prefer to take advantage of your presence while you are there to ask you questions so that I can really have as much information as possible. Because when I find myself alone in my deliberations, I won't be able to talk to you. We must not forget that eighty or eighty-five percent of cases are settled. But what we hear, as a judge, are the cases that cannot be settled. Most of the time, people come forward because they are confident in their case, they believe in what they have done, but there is a dispute. The parties don't quite agree on what to do about it. Often they are advised by lawyers. The lawyers have done the research, have done the verifications, have advised them and we find ourselves in grey areas. So positions that require interpretations, whether at the contractual level, or even at the factual level. So the appreciation of the evidence, the understanding that people have of the events they have experienced will also play an important role. So in the trial what is brought, and then in the judicial proceedings and in the trial, what the parties and the lawyers will bring are the facts. It's the collection of facts that they relate that will help us to understand a little bit how all this happened. And from that we must go and find the law, and apply the law to these particular facts in order to arrive at an adequate legal solution.

The Honorable Jean-Louis Beaudoin, a former judge of the Quebec Court of Appeal, said that the greatest professional challenge he has faced in his career is that of being a judge. The transition from legal practice to the position of judge is an exciting moment in a career in law. Nevertheless, this passage presents its share of previously unknown challenges and demands a paradigm shift for newly appointed judges. In addition to having to master a variety of areas of law, the new judge must also learn to deal with a very different professional life.

Like most of his colleagues, Judge Jean Faullem of the Superior Court of Quebec practiced law for years before his appointment, first to the Court of Quebec and later to the Superior Court. In this video, he talks about the journey to his appointment as a judge and how he experienced this important transition from his days as a litigator to his current position as a judge. He also offers a unique look at modern judicial practice and contextualizes the role of a judge in the administration of justice. 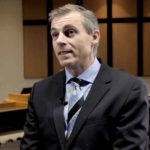 L’honorable Jean Faullem
Justice of the Superior Court of Quebec

Holder of a bachelor’s degree in law from the University of Sherbrooke (1993), Judge Faullem first practiced law at the firm of Gosselin, Buissière, Bédard, Ouellet from 1994 to 1998. In 1999, he received a Master’s degree in international law from the University of Ottawa. After a brief stint in litigation at the Canada Mortgage and Housing Corporation, he taught Internet, e-commerce and general commerce law for several years at the University of Ottawa. In 2002, Justice Faullem joined the firm Noël et Associés in Gatineau where he became a partner after several years. His practice focused specifically on matters of civil, commercial and municipal litigation.

Appointed to the Court of Quebec in 2013, he sat as a puisne judge in the civil and criminal chambers. In June 2019, he was appointed as a Justice of the Superior Court of Quebec for the districts of Gatineau, Labelle and Pontiac.