The crime of genocide in international criminal law

The crime of genocide is defined in article 6 of the Rome Statute. It is the crime that consists of wanting to eliminate a group because of its identity. In international criminal law, we have a restrictive definition of these identities: it is a national, ethnic, racial or religious identity, and it is only the groups that fall within these identities that can be victims of genocide. And the specificity of genocide – and this is what makes it the crime of crimes – is that you are killed because of your identity. Which means that they will kill the infant, they will even go after the fetus in the womb and they will kill the person of 90 years or more, because they don’t just want to kill in genocide. It is a crime of eradication, and eradication in the Latin sense of the word radix: one goes to kill the group down to its roots, one goes to look for the roots of the group in the womb of the woman’s body. It is a crime of extermination – extermination, terminus: one kills to the last. And that is the specificity of genocide, it is that one wants to eliminate the group. Moreover, in a genocide, you don’t have resistance fighters, you don’t have fighters, you don’t even have opponents. In a genocide, you have people who have the misfortune to be born: it is their identity that designates them for death; it is the identity that is mortifying. And what distinguishes the crime against humanity from genocide? we are dealing with mass crimes, we are dealimg with collective crimes, we are dealing with planned crimes, but in the crime against humanity, we do not have the will to eliminate the group because of its identity, which is the specific domain of the crime of genocide. This means that at the prosecution level, what is extremely difficult is to prove this intentional element. On the other hand, as it is the crime of crimes, this vocabulary will be used a lot, because it is the crime that arouses the most repulsion when we say genocide. Moreover, when we say genocide, we immediately see images: extermination camps, genocide of the European Jews, the Shoah, and it was such an atrocity that it immediately arouses opprobrium and the will to react. That’s why we use this vocabulary. As far as the war in Ukraine is concerned, if President Zelensky agreed to capitulate or to negotiate under Vladimir Putin’s conditions, everything would stop. So we don’t have this genocidal will. This does not mean that the constitutive elements cannot be met at some point, but for the moment, none of the constitutive elements of the crime in international criminal law have been met.

From the very beginning of Russia’s aggression against Ukraine, the term “genocide” has been used on several occasions.

The first instance of its use came from Russian President Vladimir Putin himself, who spoke of the “genocide of the pro-Russian population” of Donbass in his justification of the invasion of the country. Ukrainian President Volodymyr Zelensky later also used this term to describe the massive crimes committed against the civilian population and thus convince European countries and NATO to become involved in the conflict.

The question that arises, then, is whether genocide is indeed being committed by the Russian army against the Ukrainian people. In order to answer this question, we must return to the definition of the crime, as laid down in international treaties, respectively Article 2 of the Convention on the Prevention and Punishment of Genocide of 9 December 1948, and Article 6 of the Rome Statute establishing the International Criminal Court, which use, word-for-word, the same definition.

In this vignette, Professor Muriel Paradelle explains the fundamental element that distinguishes genocide from all other mass crimes, including war crimes and crimes against humanity.

To learn more
About the Researcher 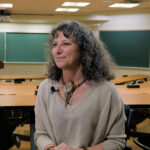 Muriel Paradelle is a professor at the University of Ottawa’s Faculty of Law (Civil Law Section). She is interested in the challenges and difficulties faced by justice when it comes to dealing with crimes committed within the framework of state policies that use extreme violence to terrorize or annihilate a part of their population (genocide, crimes against humanity, ethnic cleansing, the use of torture and enforced disappearance as means of control). She is the author of the novel Un silence de pierre et de cendre (A silence of stone and ashes), a fictional work in which she intends to disseminate, other than through scientific research, the fruit of her work and her reflection on these issues.