Professor Aimée Craft of the Common Law Section of the University of Ottawa’s Faculty of Law leads an in-depth discussion of Indigenous research methodologies, exploring what “Indigenous research” really means. This presentation was featured on the first day of the 4th Autumn School on the Methodology of Research in Law.

“If we think about core principles that apply to Indigenous research, they’re all founded in ideas of relationship, and particularly in reciprocity and respect.”

Drawing distinctions between research that is about Indigenous Peoples and research that is either led by Indigenous researchers or that uses Indigenous methodologies, Professor Craft emphasizes that relationships form the foundation of Indigenous research. Using examples from her own work on decolonizing water governance, and her extensive experience working with Indigenous nations and communities, Professor Craft sheds light on specific approaches to research with, for and by Indigenous communities, paying special attention to the ethical questions and community dynamics that must be taken into account to create effective research methodologies. She discusses the importance of researchers having a strong grounding in the systems of knowledge in which they work, such that they be responsive to community needs whenever they undertake work that either engages with or that is led by Indigenous communities.

Ultimately, Professor Craft points to the importance of reciprocity and respect in Indigenous research, noting that relationships built through research with Indigenous communities are rich, lifelong relationships.

Learn More
About the researcher 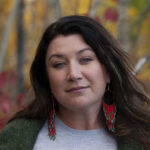 An Indigenous (Anishinaabe-Métis) lawyer from Treaty 1 territory in Manitoba, Aimée Craft is an award-winning teacher and researcher, recognized internationally as a leader in the area of Indigenous laws, treaties and water. She holds a University Research Chair Nibi miinawaa aki inaakonigewin – Indigenous governance in relationship with land and water.

Professor Craft is the former Director of Research at the National Inquiry into Missing and Murdered Indigenous Women and Girls and the founding Director of Research at the National Centre for Truth and Reconciliation. In 2021 she was awarded the prestigious Canadian Bar Association President’s Award and was named the Early Career Researcher of the Year Award at the University of Ottawa. She is a current member of the Speaker’s Bureau of the Treaty Relations Commission of Manitoba.

Professor Craft prioritizes Indigenous-lead and interdisciplinary research, including through visual arts and film, and she co-leads a series of major research grants on Decolonizing Water Governance. She plays an active role in international collaborations relating to transformative memory in colonial contexts and relating to the reclamation of Indigenous birthing practices as expressions of territorial sovereignty.