Believing in your dreams

My name is Justice Michelle O’Bonsawin. I am a judge in the Superior Court of Justice in Ottawa. I’m an Abenaki woman. I grew up off-reserve in Northern Ontario. My reserve is called Odanak, it’s in Quebec. I come from a small Francophone community named Hanmer in Northern Ontario. When I was nine years-old I decided I was going to be a lawyer. So when I announced this to my parents it was quite the surprise for them because no one in my family was ever a lawyer.

When I was in high school, I met with my guidance counselor and I told him that I was going to be a lawyer and he told me, “well, Michelle, you come from a small French town in Northern Ontario, that’s likely not to happen, so you should maybe change your career path.” And I had decided no, this is what I’m going to, do. Watch me.

I did my bachelor’s in Arts at Laurentian University and then I came to University of Ottawa in the French Common Law Program. I started off at Justice at the RCMP Legal Services. Then I went to Canada Post where I practiced for nine years doing labour and employment across Canada. Then afterwards I left to go to the Royal Ottawa Healthcare Group to become the General Counsel where I specialized in labour and employment because they had five unions, but I also specialized in mental health law with a specialty in forensic mental health. In the first year that I was here in French Common Law Program someone from the Commissioner’s Office came and spoke to us to describe how you got to be a judge, so you had to have the 10-year requirements, et cetera, and someone in the crowd had asked him “well what’s the perfect judge?” And he said, “the perfect judge is an Aboriginal bilingual woman”. I thought, hey, that’s me!

In October of 2016, I applied to the judiciary and was named the first Indigenous woman at our court in May 2017. Transition from the practice of law to the bench was not an easy one, it was quite the transition for me because I had specialized in areas of the law that aren’t the bread and butter of what we see in the Superior Court. The three lines of business are family, civil and criminal, so it was quite an adjustment for me especially in the first year. I had to do a lot of self-education. I had to get myself great mentors. The best for me was Justice Charles Hackland (the Honorable Charles T. Hackland), who really held my hand and helped me out in the first year because it is a significant transition going from the practice to law to the practice of being a judge. It’s completely different.

I think as judges we have an important role to play in access to justice. We have an active role to play about speaking in the community about what we do and what our role is. And I think it’s important for those that appear in front of us, not just the lawyers but the general population, to understand what a judge does and what our role is and how everything meshes together when the public appears in front of us.

The Honorable Michelle O’Bonsawin is a judge of the Ontario Superior Court of Justice. As the first Indigenous woman to be appointed to the Superior Court of Justice in Ottawa, Justice O’Bonsawin is particularly interested in issues related to access to justice, especially with regard to First Nations and vulnerable populations within our communities.

In this video, Justice O’Bonsawin describes the unique journey that has led to her fulfilling her childhood dream of becoming a lawyer and then taking up her post as a judge. She offers an inspiring story for young people who aspire to achieve their full potential through the legal profession. 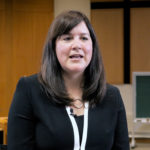 Michelle O’Bonsawin
Judge of the Ontario Superior Court of Justice

The Honorable Michelle O’Bonsawin has been a judge of the Ontario Superior Court of Justice in Ottawa since 2017. Prior to her appointment, she worked with the Royal Ottawa Care Group in 2009 as General Counsel. She also served as internal legal counsel at the Canada Post Corporation. Perfectly bilingual, Justice O’Bonsawin has developed expertise in the areas of mental health, labour and employment law, human rights and privacy law.